For this year’s International Women’s Day, we’re featuring six new interviews from inspirational women who are carving out extraordinary careers in motorsport. 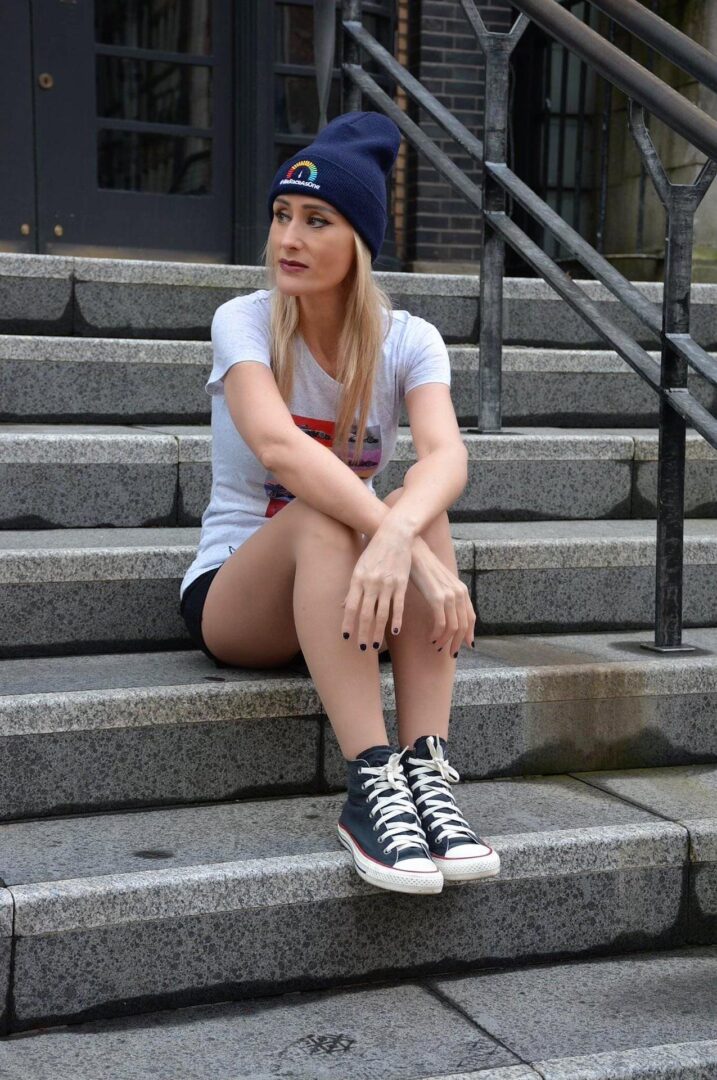 Tell us a little bit about yourself

My name’s L.A Wilshaw, and I’m a Broadcast Journalist.  I’m from the great city of Manchester, in the North West of the UK, but by no means am I settled here. I’m a nomadic traveller by heart, and have been globe-trotting for over 20 years… which definitely suits a motorsport lifestyle.

Please tell us a little about the role that you do

InsideF2 has been the primary platform that I’ve made my motorsport contributions to. In addition, I’ve participated in projects for Formula One, Motorsport UK, Girls on Track UK, FIA Women in Motorsport, and Downforce Radio.

Primarily I’m an editor at InsideF2, where I receive written features from the website authors. I’ll proofread, and re-write if necessary, to suit the tone and style guide of the platform. There’s an element of feedback and training involved for the less experienced contributors, who are also learning to develop their own talents and skills in motorsport journalism. But like most things in life, being thrown in at the deep end is the only real way to learn.

I host my own YouTube series, “InsideChat”, for insideF2, where I interview Formula 2 drivers, team principals, team managers, and other professionals associated with the feeder series.

Over race weekends, I’m in attendance of the driver press conferences at the end of each live session (via Zoom in 2021). Here’s where I get to ask the top three drivers about different aspects of their session, whether they’ve qualified in third place, or if they’ve lifted the winner’s trophy in the weekend’s sprint or feature race. I’ll then write up their responses for post-session articles.

Over the last two years, I have also contributed to various motorsport podcasts, including insideF2’s “The F2 Show”, Drivetribe, Motorsport Week’s, “Motorsport Speak”, and I was co-presenter on Downforce Radio’s, “All About the W”, with commentator and writer, Alex Goldschmidt in 2021 (W Series podcast). 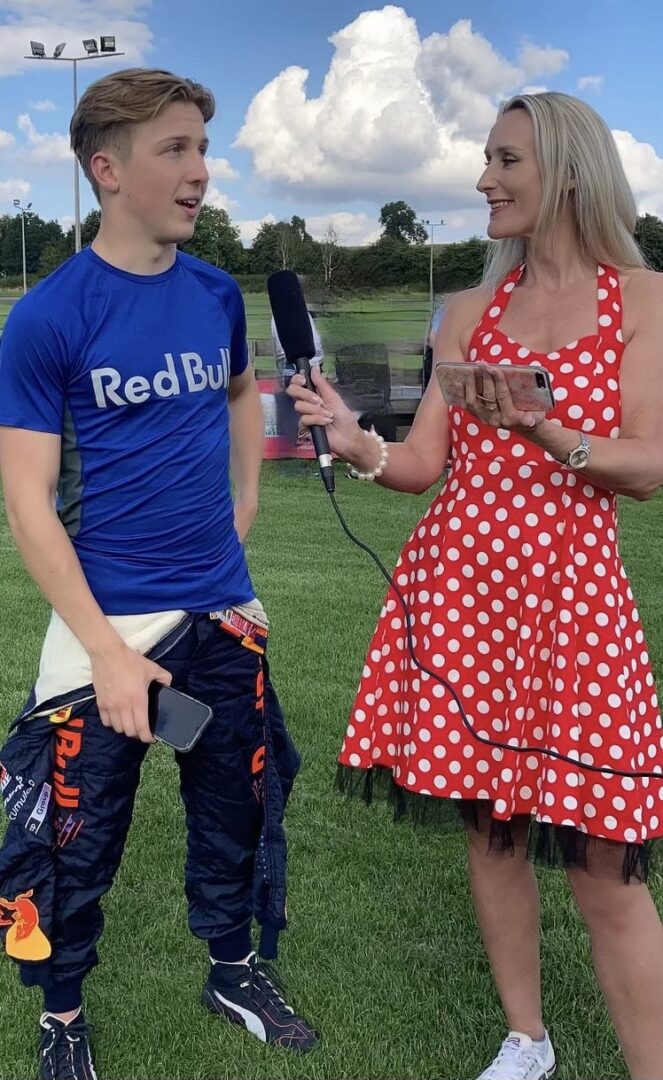 What did you study for the role?

I studied a BA (Hons) Degree in Media & Performance, at the University of Salford, and graduated in 2012.

What was your experience as a woman on your course?

My course was a combination of technical production for film and television, and performing arts, where I enjoyed learning a range of skills. From directing and editing, to writing, acting, and radio/TV presenting, + much more.

We had a mixed ratio of females and males. However, at the 2010 Student Radio convention, I chatted with a Sports Broadcasting professor from a different university. He voiced his disappointment that there was a distinct lack of female attendees on his degree course. I remember, he attempted to coax me to transfer to his course from mine, because of my life-long passion for football and motor racing.

Did you do any extra-curricular activities/work experience?

The placement I had whilst studying, was with BBC Radio Manchester (Media City).

I worked on the weekly radio magazine, “Blue Tuesday” – A live radio broadcast, dedicated to Manchester City Football Club. I interviewed fans at Manchester City’s Etihad stadium, and edited the recordings into a vox pop at the BBC studio. This was to complement the show content, where discussions on recent games or upcoming matches would be discussed between the host, and studio guests, that included former players, and fans.

Who is your favourite female role model in motorsport?

In the era of days gone by, it has to be, Maria Teresa de Filippis – The first woman in a Formula 1 racing car. Maria sadly had to tolerate discrimination and sabotage at the highest level. She drove in three races and finished in P10 at the 1958 Belgian GP. I don’t know how she felt about what she did or didn’t achieve, but from my point-of-view, her legacy isn’t her racing career, it’s the fact that she didn’t go out quietly. At a great risk she exposed the happenings, which I feel has helped to pave the way for my next favourite female in motorsport…

In the present-day era, without hesitation, I would say Susie Wolff. From my perspective she did everything she could to fulfil her dream of being a Formula One racing driver. She may not have won races or world championships, but she gave it everything she could.

Not only did she achieve her dream of driving a Formula One car, she is a super-mum, devoted wife to Toto Wolff, CEO/Team Principal to Venturi Racing in Formula E, and has been spearheading the changes in attitudes towards females working in motorsport, with her, “Dare to be Different” initiative. Teaming up with Girls On Track to reach wider audiences across the world, the programmes offer a glimpse into the world of motorsport at grass roots level.

In 2021 I contributed to the initiative by leading a ‘Presenting Challenge’, for 100 girls between the ages of 10-12 years to try their hand at post-race driver interviews.

The Rising Stars driver programme is highly significant. Motorsport still needs to do more to offer equal opportunities within the cockpit. One day, I’m confident these kinds of programmes, and championships, such as W Series won’t be a necessity, they will simply function as an option for opportunity

What’s the best thing you did to get you to where you are today?

Get on a plane! I’m in Bahrain after just attending the Formula 2 and Formula 3 Testing!

I responded to a Tweet two years ago, from the founder of insideF2, who was asking for contributors to his new platform. The next best thing I did was commit 120% to the founder’s vision. As an initial small team, we’ve grown in number and in reputation, and all of our contributions and efforts are paying off!

Being right in the middle of a sport that I have loved for more years than I care to say!

With tears of joy on my face, I have danced around living rooms in celebration of race, and championship wins, and in contrast, I’ve wept uncontrollably, in utter devastation and heartbreak, as I’ve watched heroes perish. 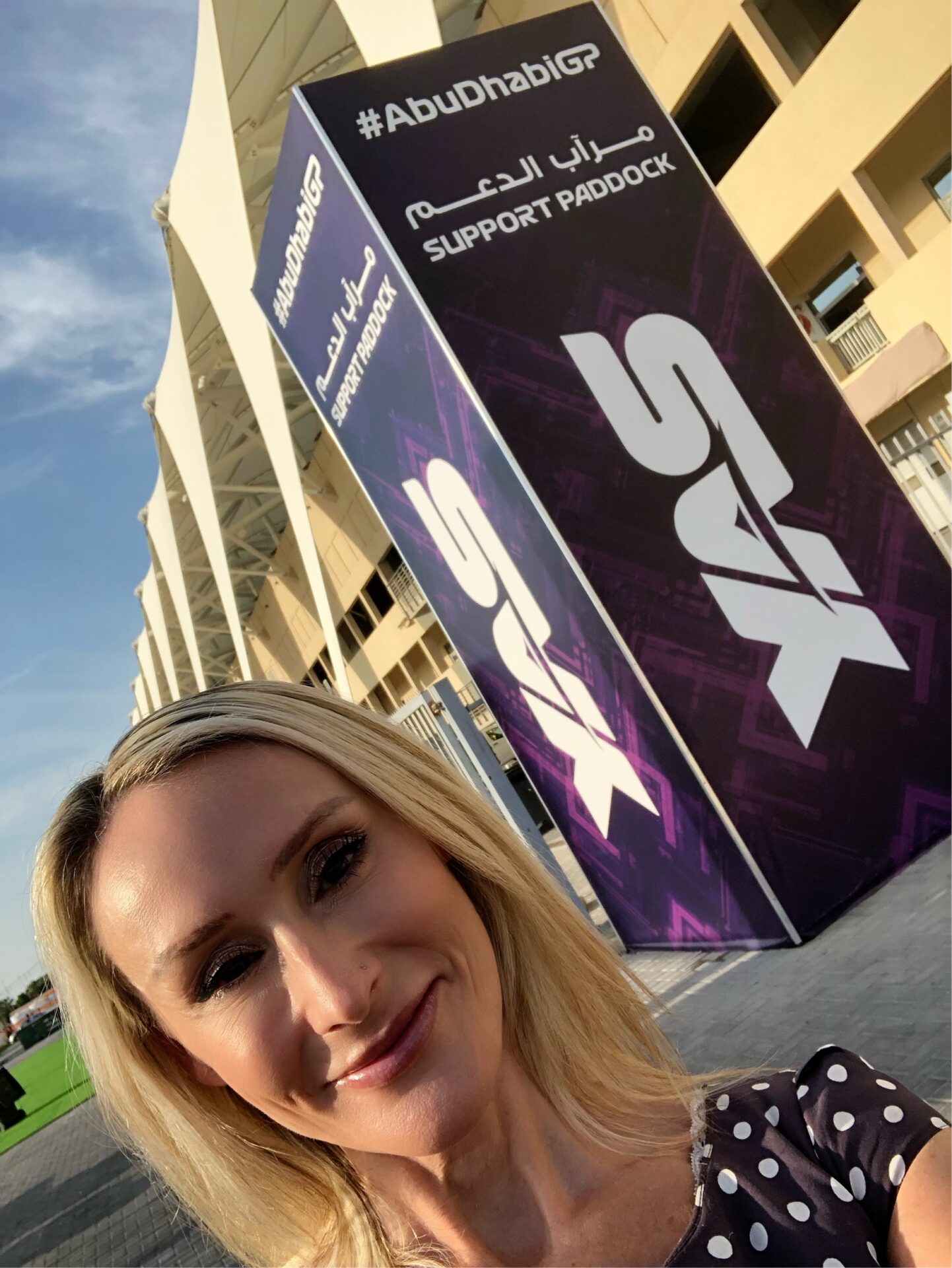 What’s been your highlight so far?

Attending the F2/F3 Testing in Bahrain this very week (March ’22), and being present in the Abu Dhabi Formula 2 paddock in December, interviewing drivers and team principals.

What would you say to girls who aspire to work in motorsport one day?

My ultimate motor racing hero, Ayrton Senna, inspires me with this:

“With your mind power, your determination, your instinct, and the experience as well, you can fly very high…” 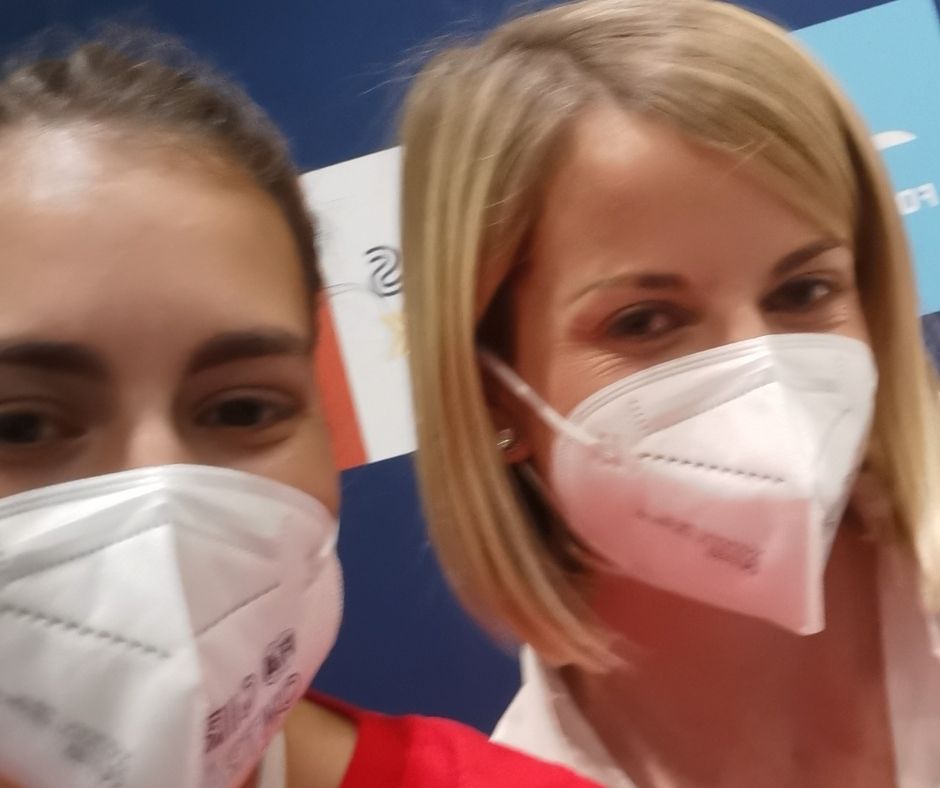 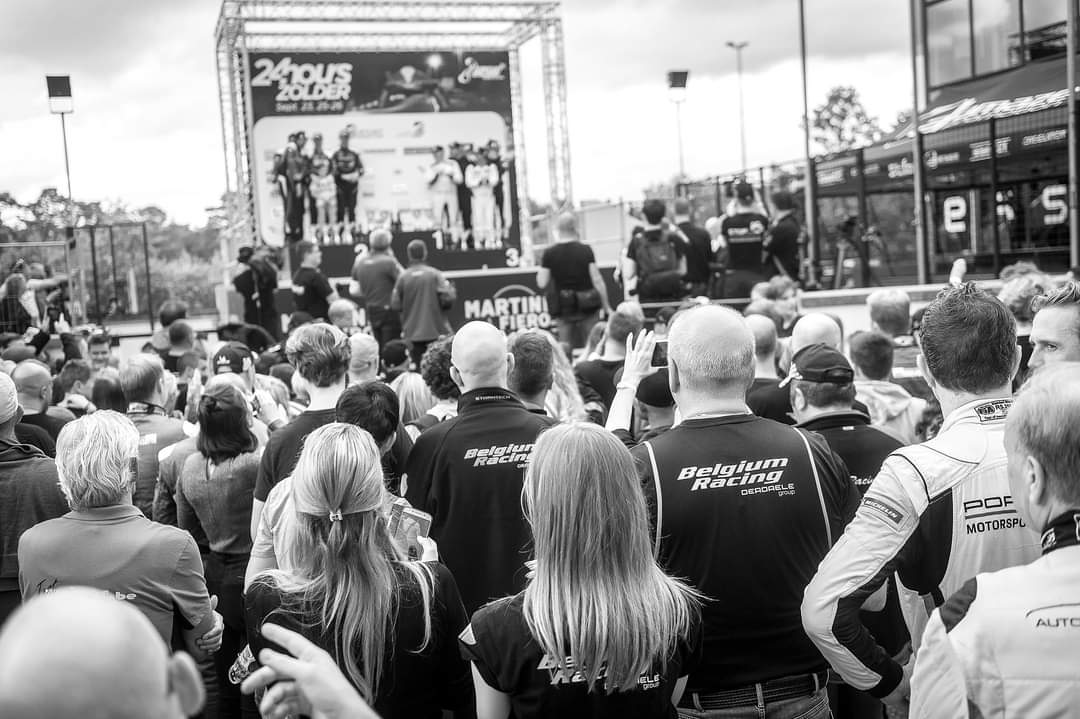 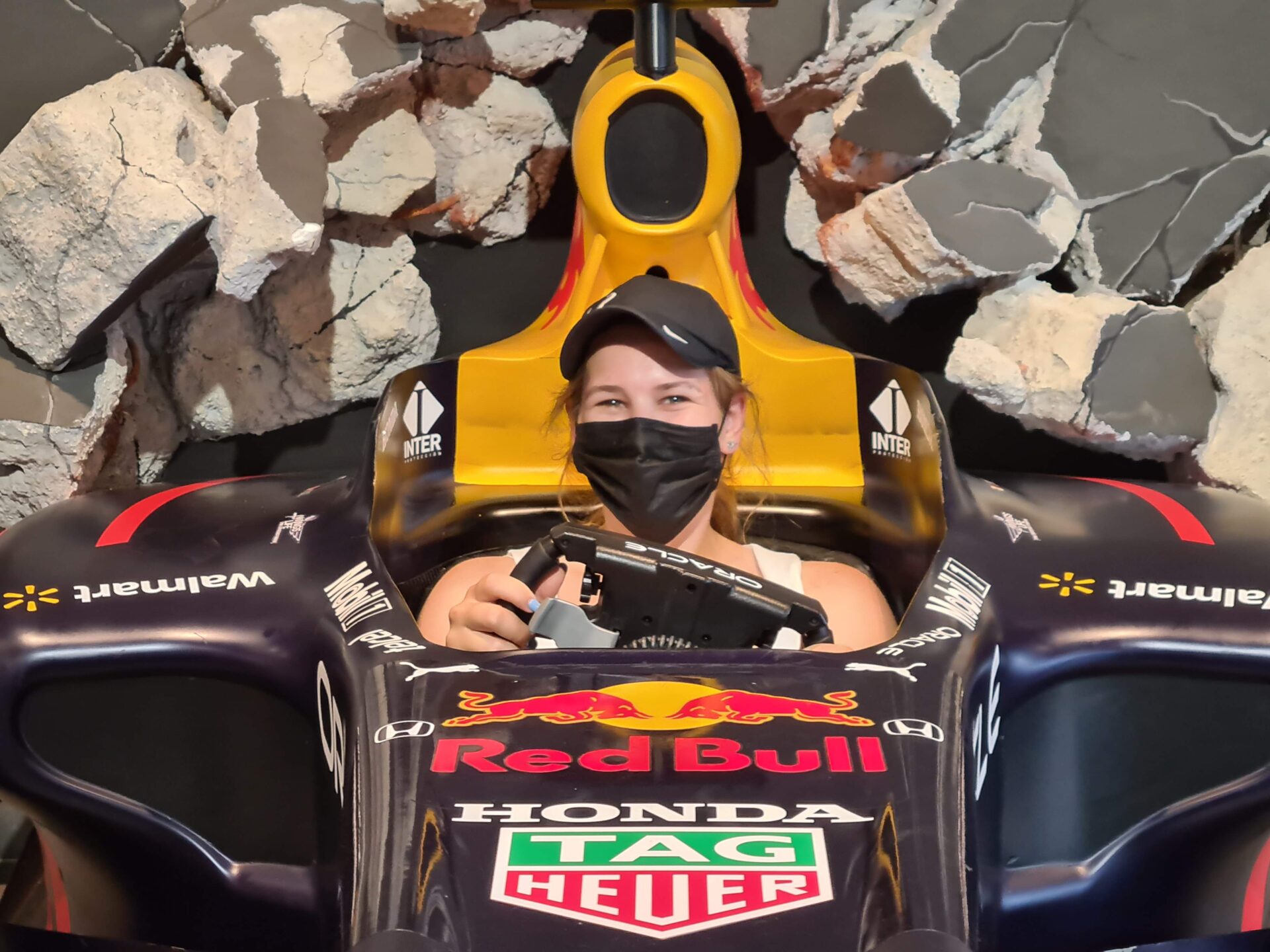